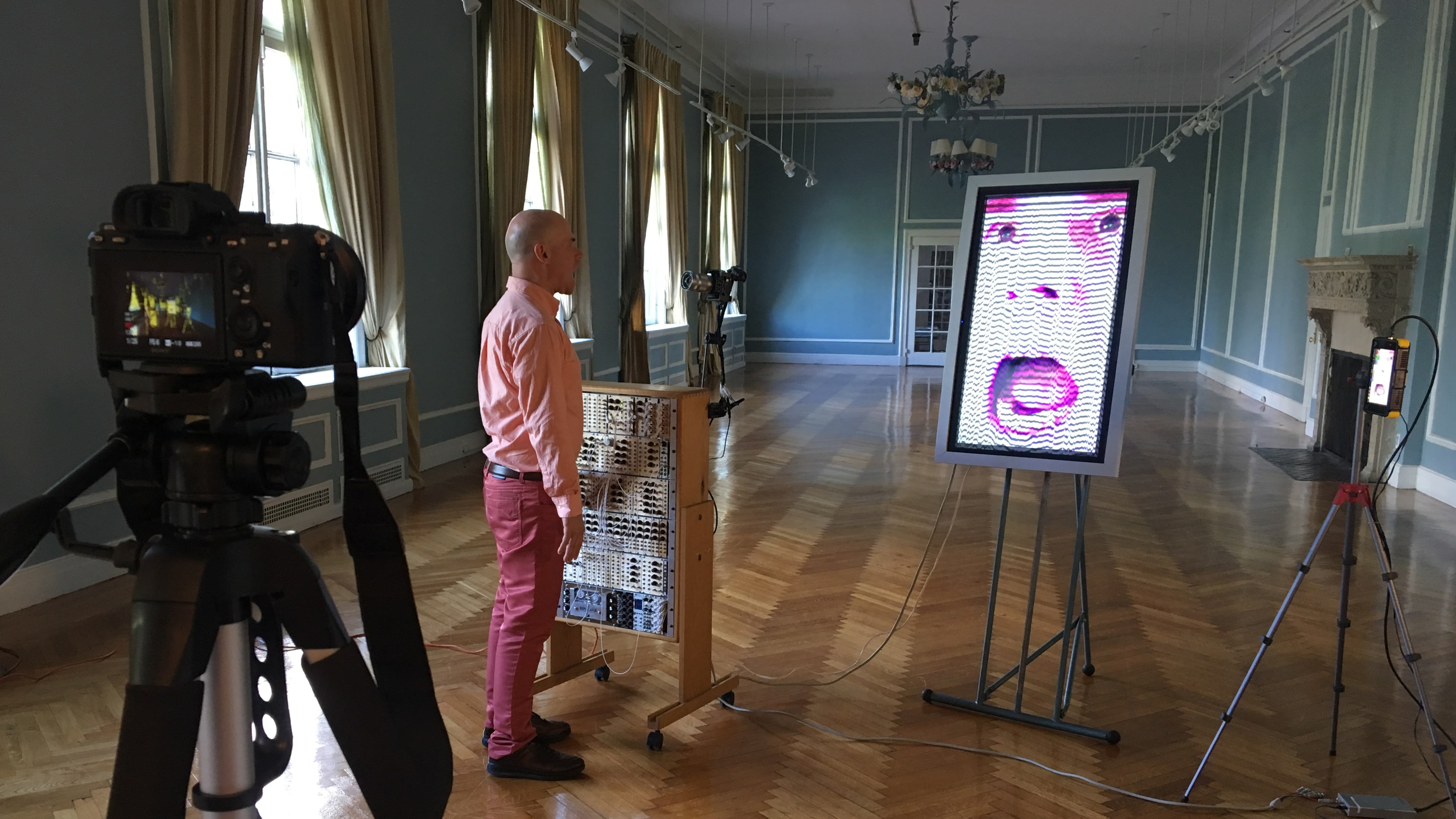 Panaroma of The Andrew Freedman Home facade in March, 2016

Palazzo on the Grand Concourse

Benton C Bainbridge is Artist-In-Residence at Andrew Freedman Home in The Bronx, where he hand-crafts media art with video synths. The resources and community of the AFH AIR have been invaluable; the residency period has been extremely productive for Bainbridge and his collaborators.

Across the street from Bronx Museum on the Grand Concourse, Andrew Freedman Home is an Italianate palazzo on grounds that cover an entire square block. The mansion was built as an old-folks' home for the formerly wealthy, and is now a space for arts and community.

Andrew Freedman Home supports two dozen resident artists with studio, rehearsal and exhibition space in renovated rooms of the mansion. The main floor includes three ballrooms, a large kitchen, a billiards room and a library; all are put to use in AFH's immersive, transdisciplinary shows. 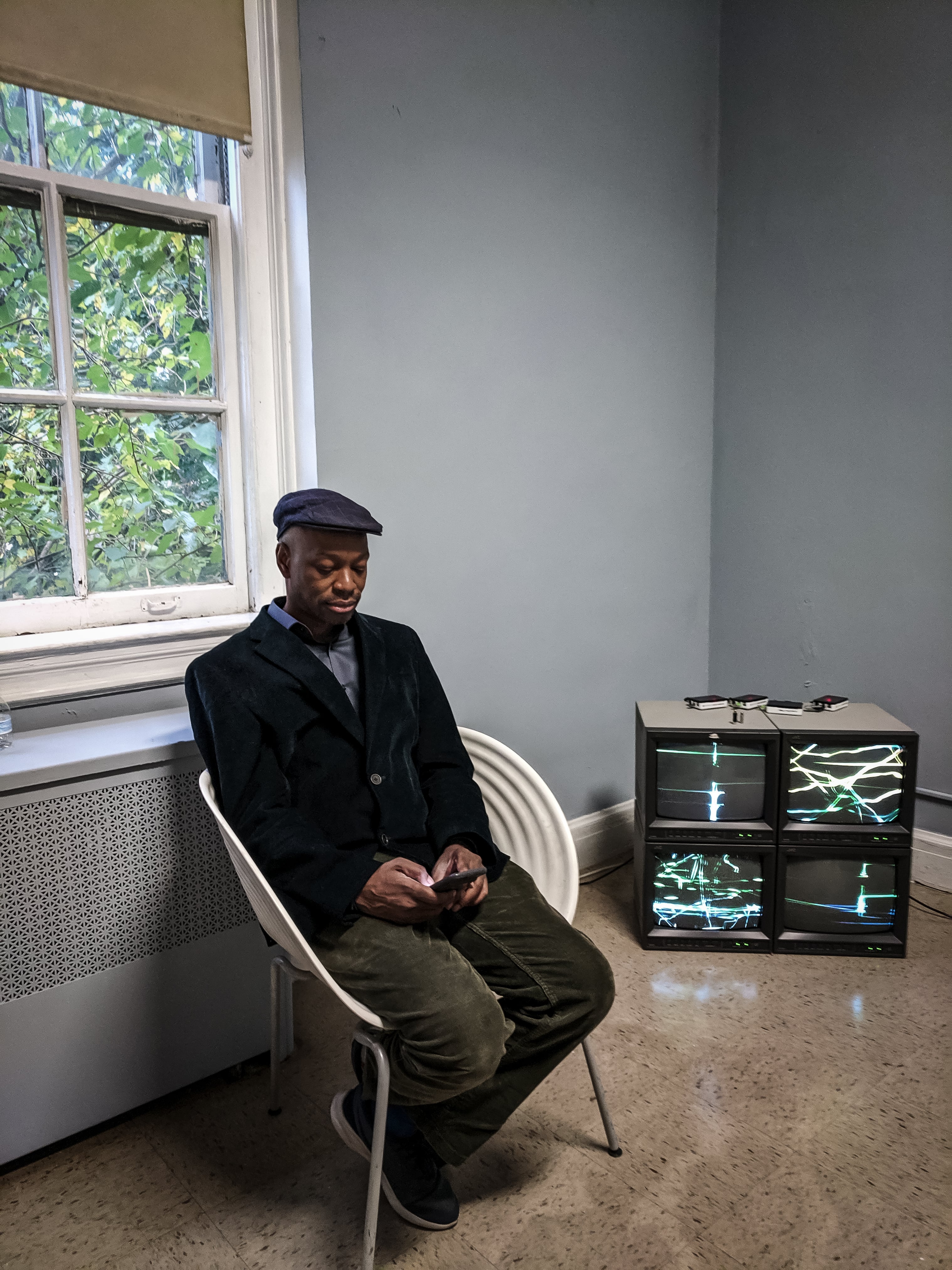 Having a stable space to work out of has enabled Benton to focus on a life-long dream; building an analog modular video synth studio. Much of Bainbridge's work is crafted with these bespoke visual instruments, which give his work its analog vibrance. 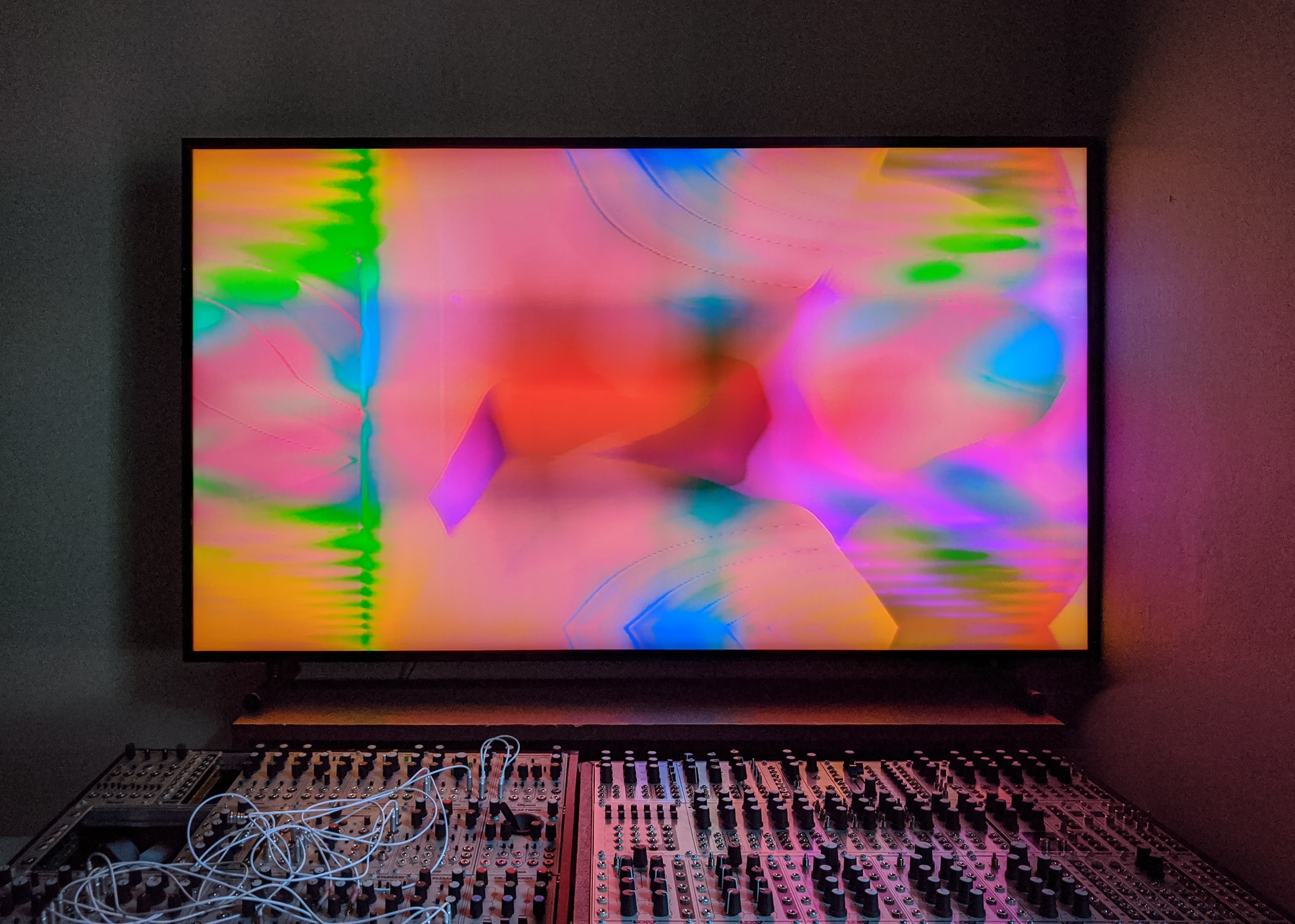 Walter E. Puryear and the AFH AIR have also generously supported Bainbridge's obsession with CRTs. Benton has accumulated a collection of vintage tube displays, with which he designs installations and video sculptures. 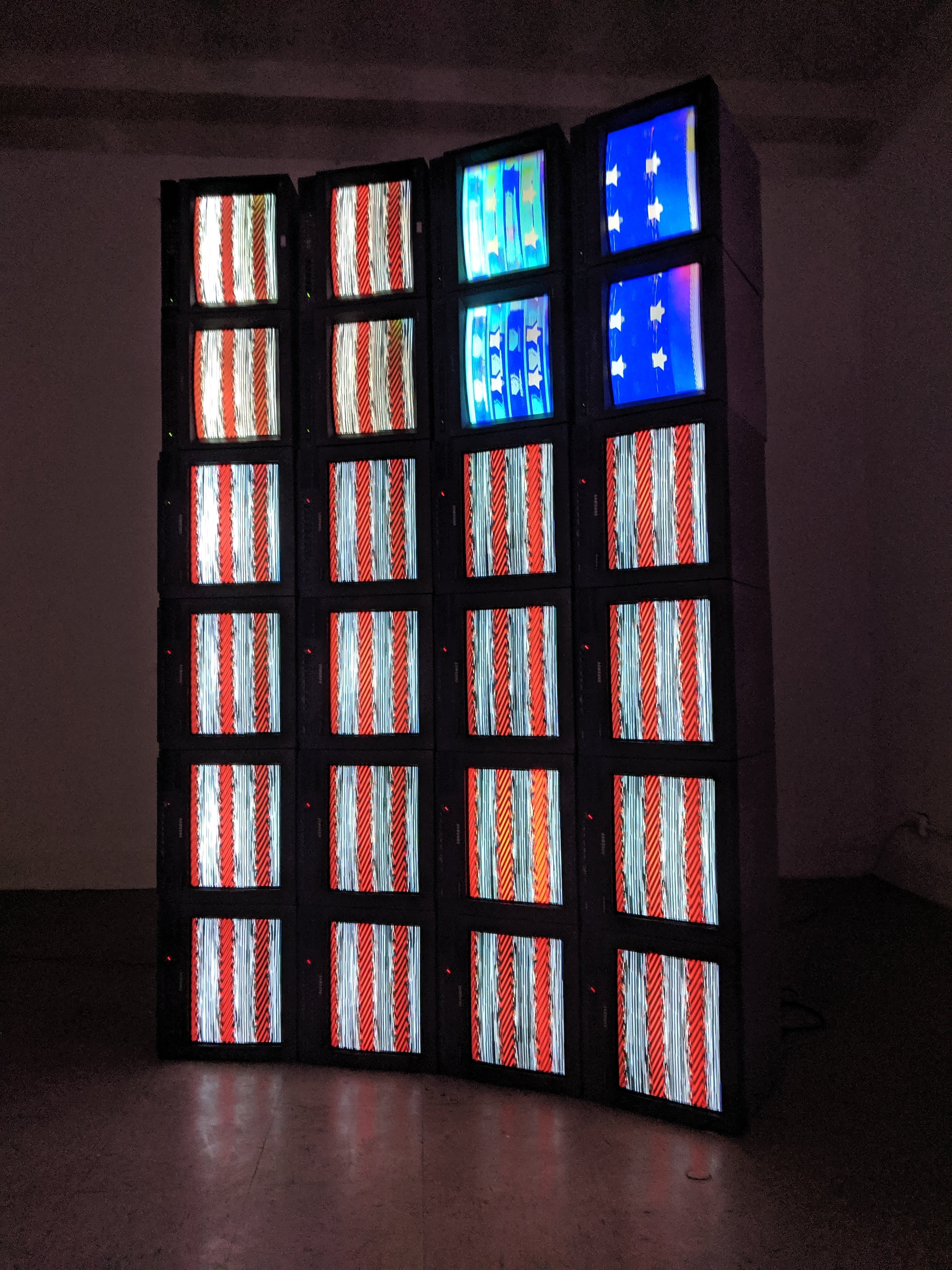 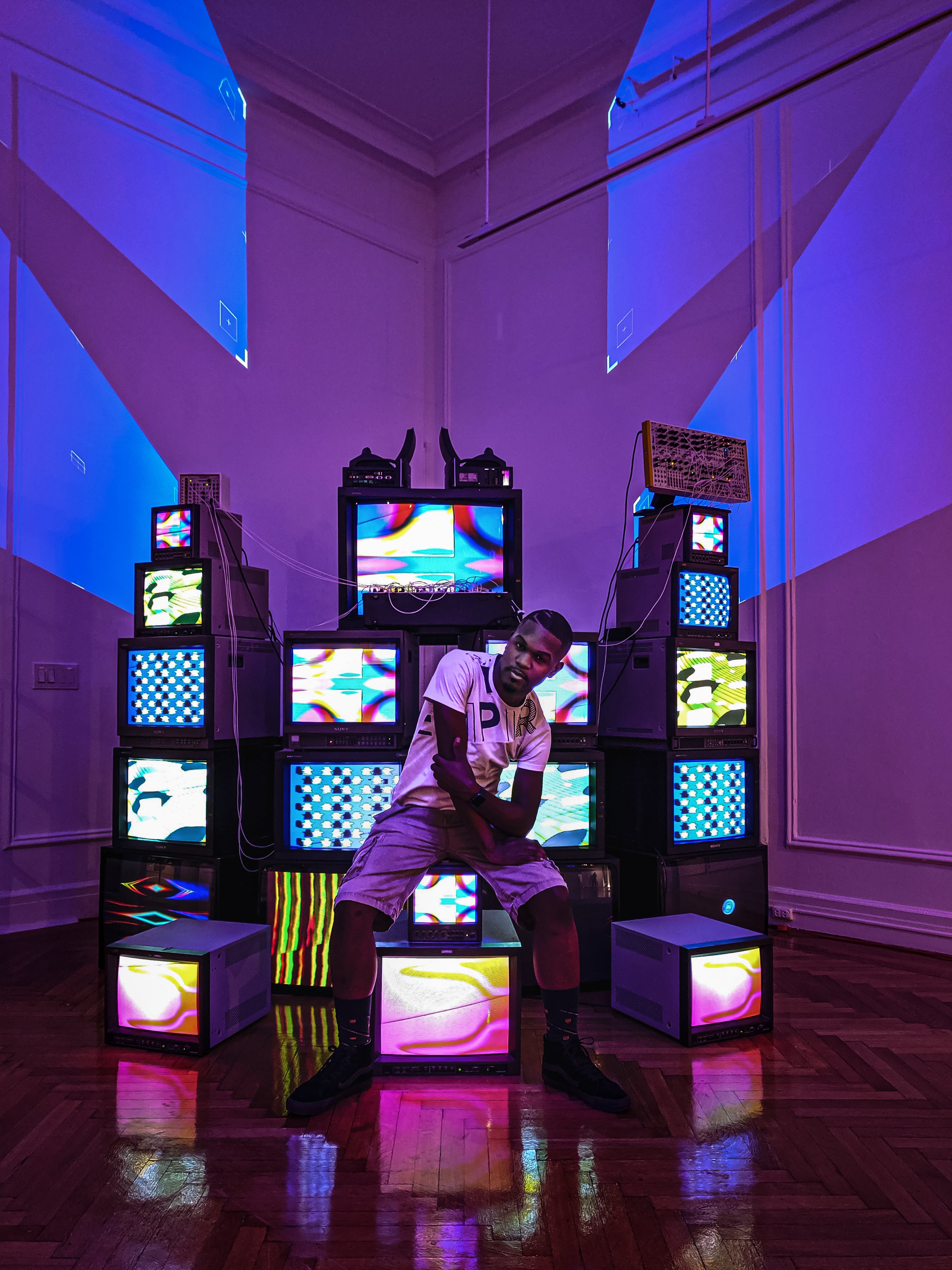 Benton C Bainbridge: Beauteous with one of the performers from the play by muMs for which the artwork is named, 2019

The Beauteous production filled the mansion grounds, two floors and the roof with dozens of artists and performers in a realization of muMs' dystopian vision of ecological collapse and social media's colonization of social economics. The production climaxed in the Home's Grand Ballroom, where the collaborators mixed projection mapping, 3D printed wearable sculptures, light art, performance art to the tones of 12E, the AFH band-in-residence. 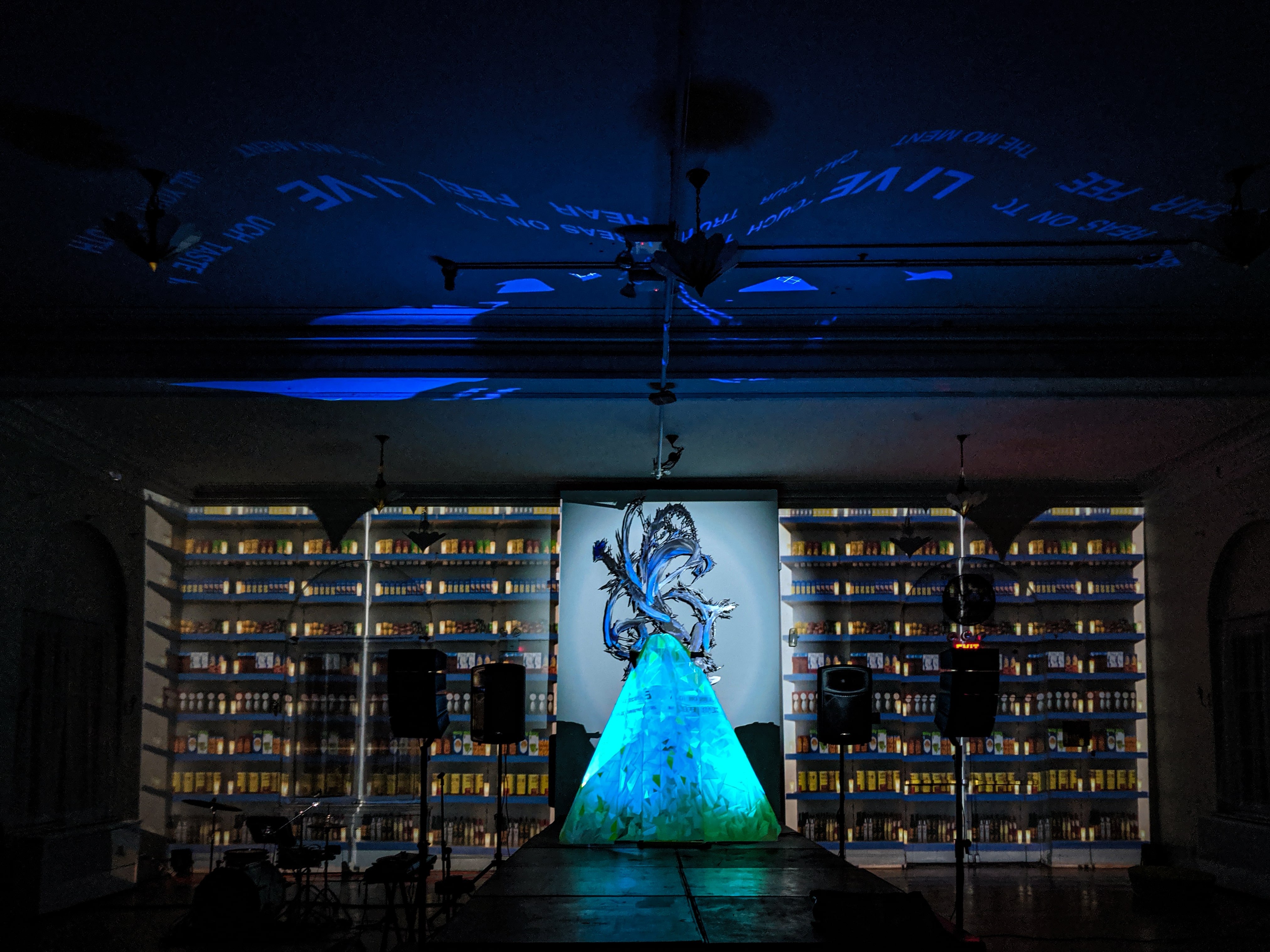 The AIR program at AFH has supported Benton's many other collaborations, including Rue Bainbridge. This duo with sonic artist Gryphon Rue exists at the intersection of expanded cinema and sonic art. Bainbridge draws electric calligraphy with a hacked game console; the light patterns become a score, with visual rhythmicity suggesting electro-acoustic strategies. 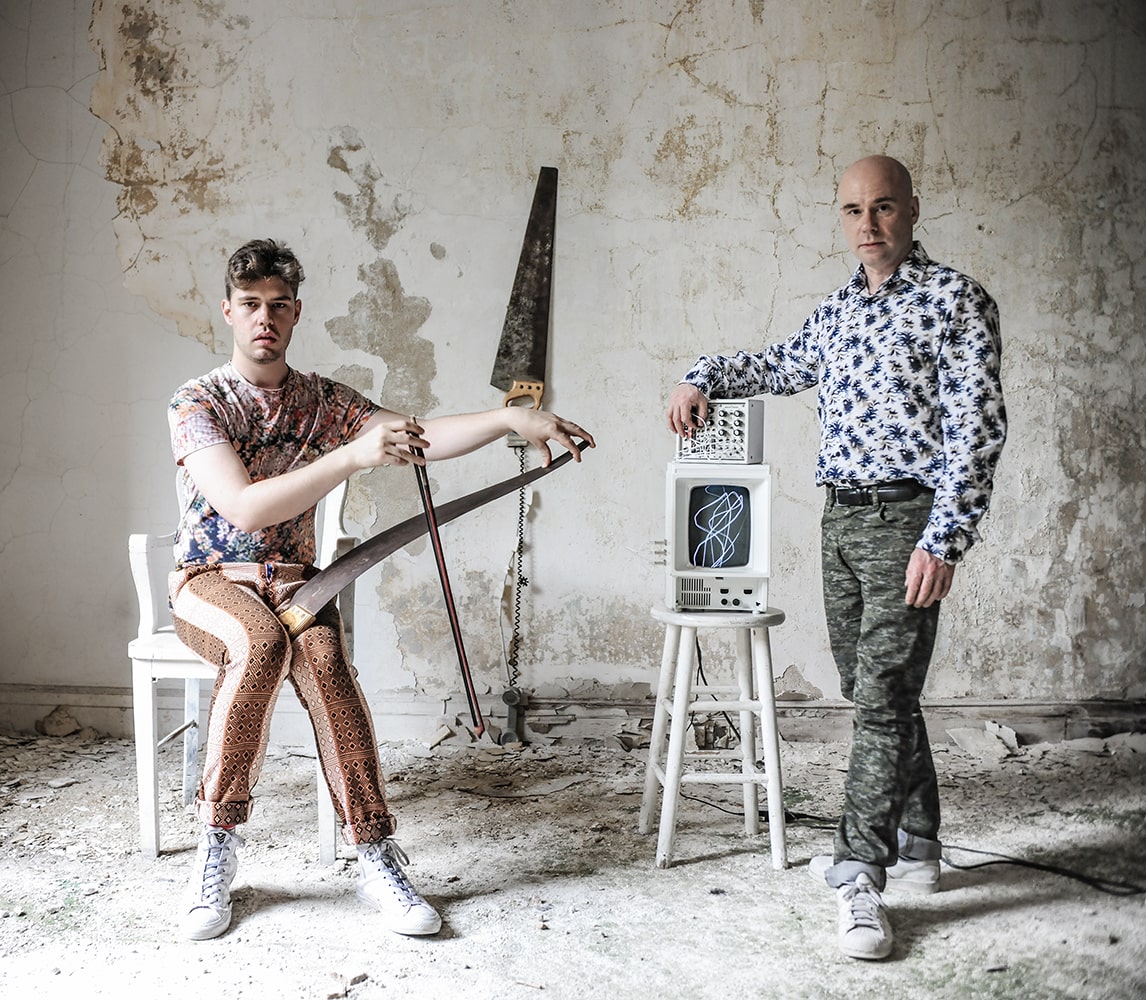 Rue Bainbridge at AFH in a decaying room that has since been renovated (photo: Luis D Rosado)

The well-worn elegance of Andrew Freedman Home inspired Rue Bainbridge to shoot the first of a series of audiovisual performances at spaces in transition—including an abandoned 18th century London hotel favored by rock stars (Slate Projects / Foreign Domestic at Averard Hotel), a renovated flour mill in Downtown L.A. (Hauser & Wirth), the mechanical room of an abandoned restaurant in Tribeca (drone / de Young Museum) and an officer’s house on a former military island (Public Works at Governor's Island). Rue Bainbridge has also been invited to improvise in galleries, responding to artworks at The Hepworth Wakefield Museum and Pace Gallery.

Freedom and the African Diaspora

Another collaborative, Rodriguez, Gonzalez, Bainbridge, was invited by AFH to stage an immersive performance in response to the artwork of Fabiola Jean-Louis. The trio worked with musicians, performers and dancers to guide a select audience through the galleries and ballrooms and library of Andrew Freedman Home in Ezili Dantor: Freedom and the African Diaspora.

As with Beauteous, the immersive installations stayed on exhibit following the performance. Again, the support of AFH allowed Bainbridge to refine the work during its run, documenting the iterations along the way.

One Step Beyond AFH

The ample space and cheerful vibe at AFH is fertile ground for collaborations between residents. Traffic between studios up and down the block-long halls leads to ambitious projects. The collaborations are seen at the Freedman mansion and other venues, including American Museum of Natural History. AFH artists frequently joined Bainbridge's crew to mix live visuals for the AMNH after hours monthly, One Step Beyond. Benton C Bainbridge was the resident media artist for the entire 11 season run of this transformative museum art party. 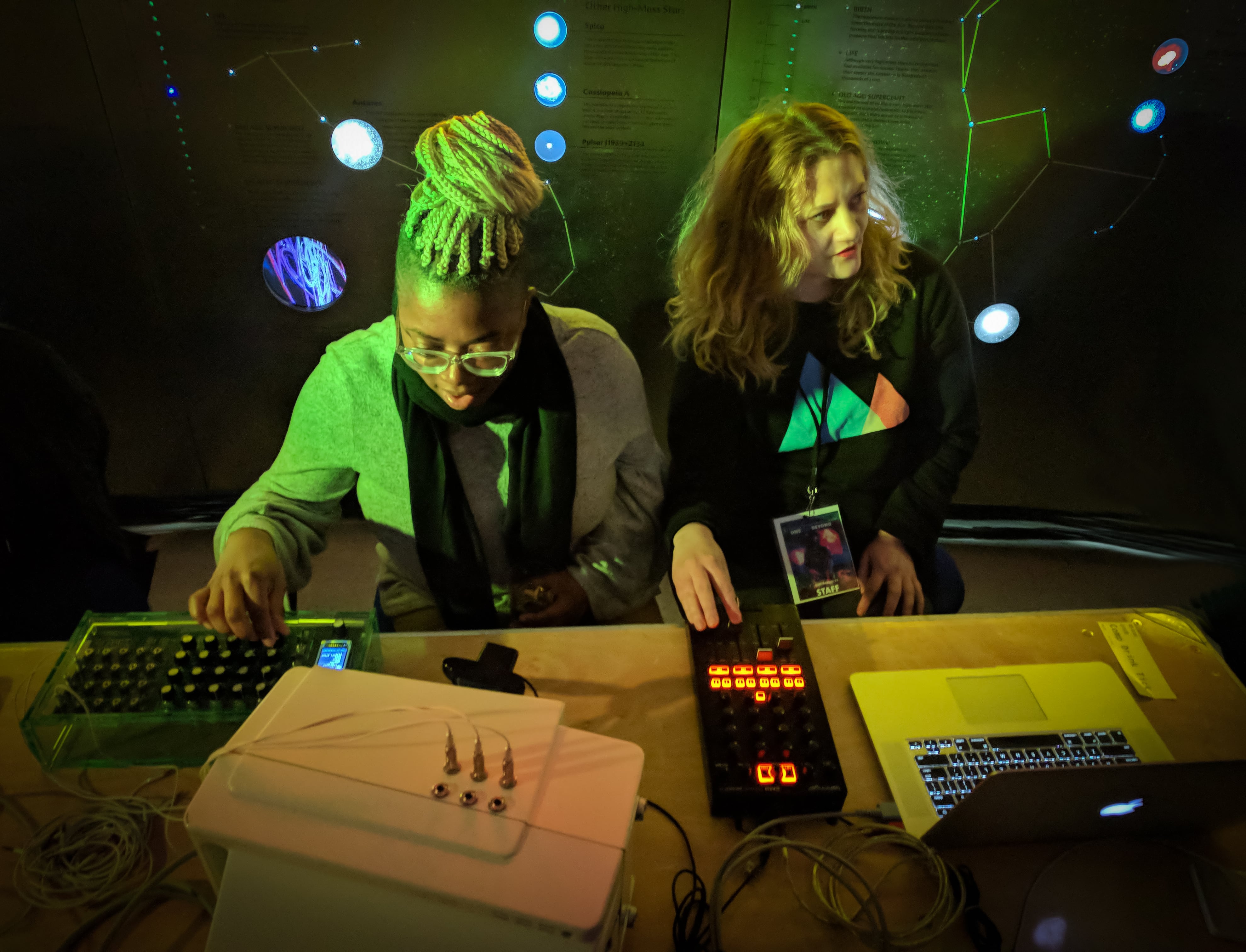 The AFH palazzo is a vital meeting point for neighbors from The Bronx, NYC's boroughs, and beyond. Benton makes video portraits of those he meets, and designs interactive installations where guests make painterly video self-portraits. The support of the AIR program allows Bainbridge to evolve his exhibitions, iterating and tweaking installations over the course of weeks in AFH project spaces. Collectively, these artworks portray the community that orbits around Andrew Freedman Home. 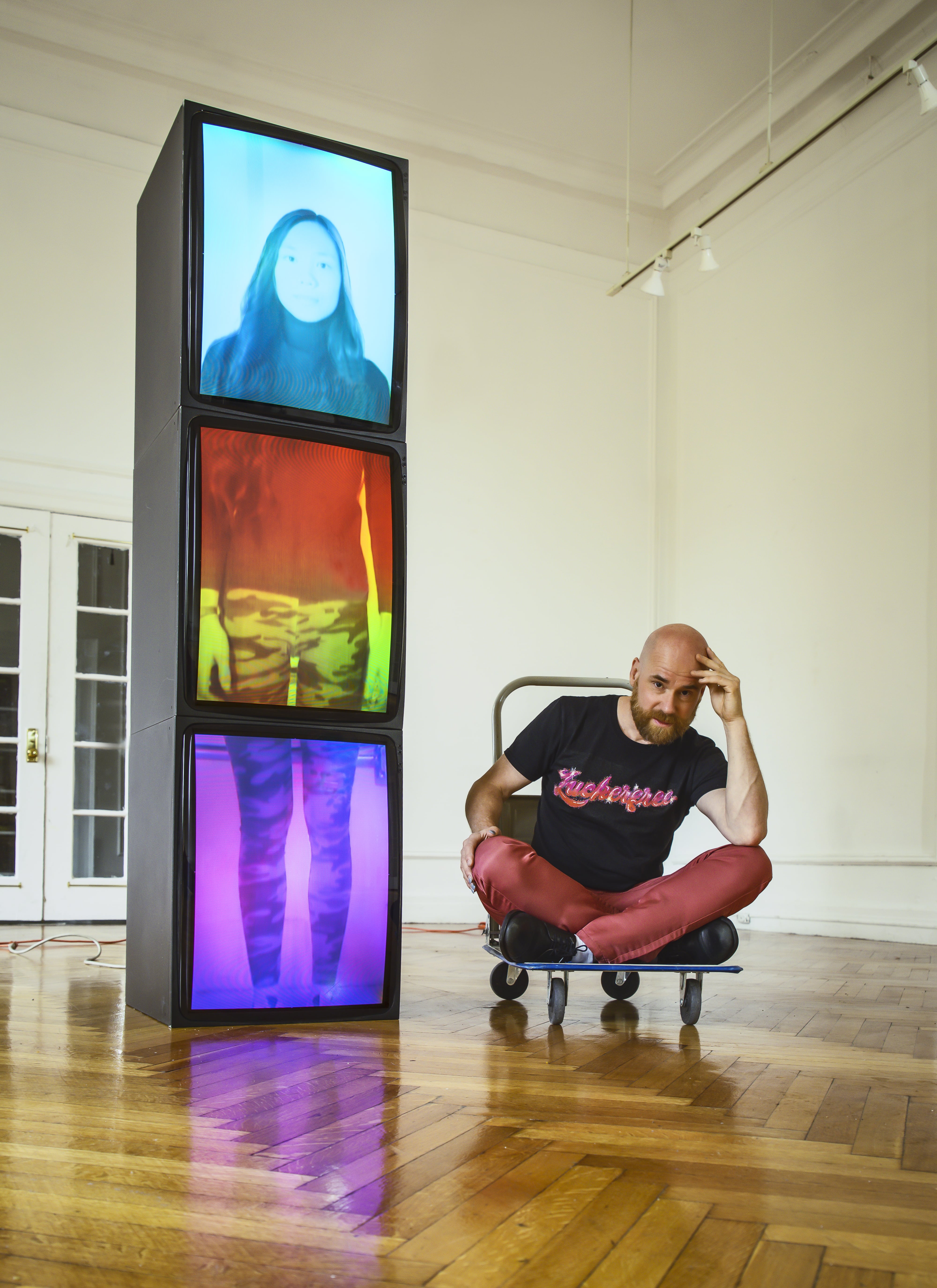 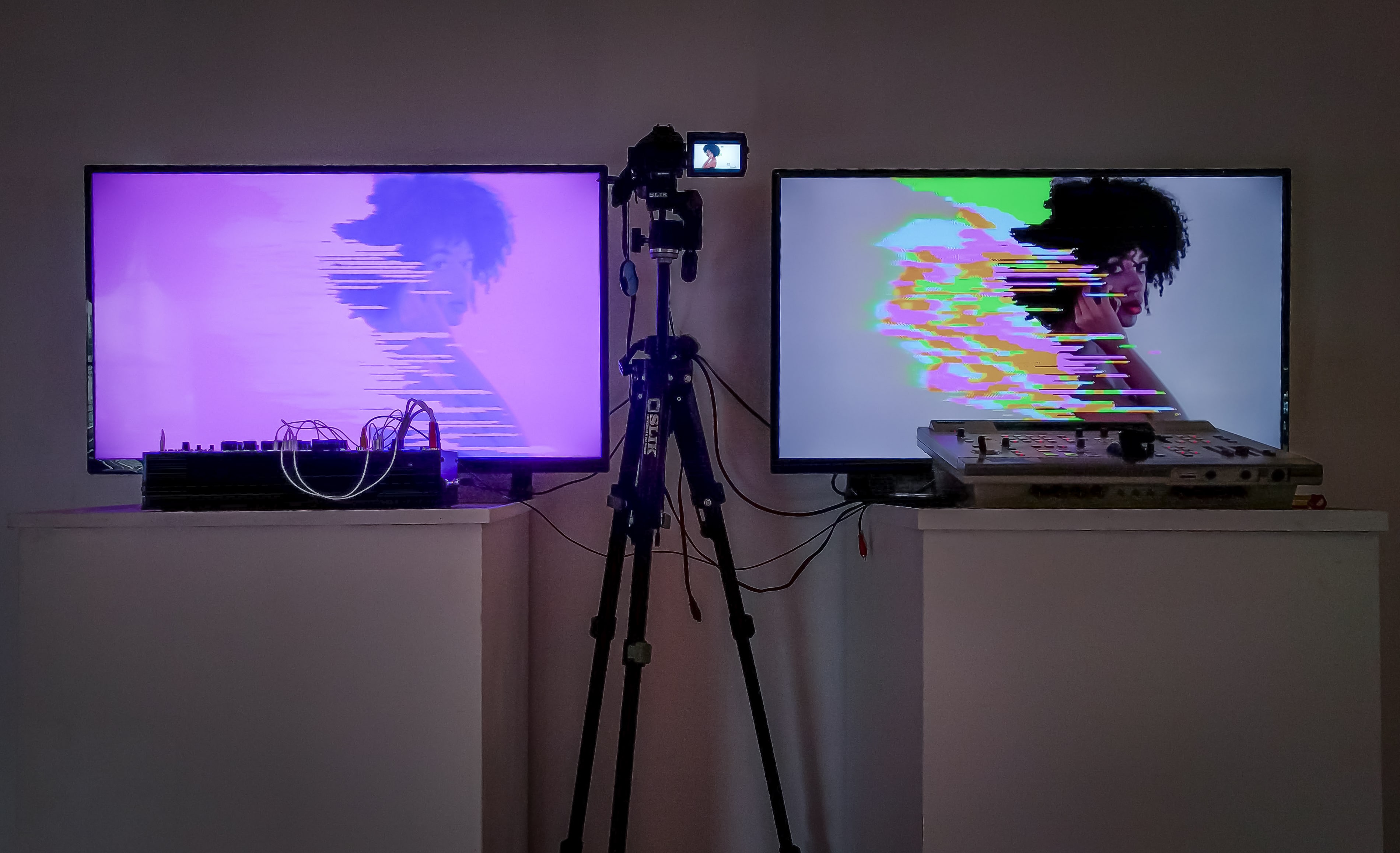 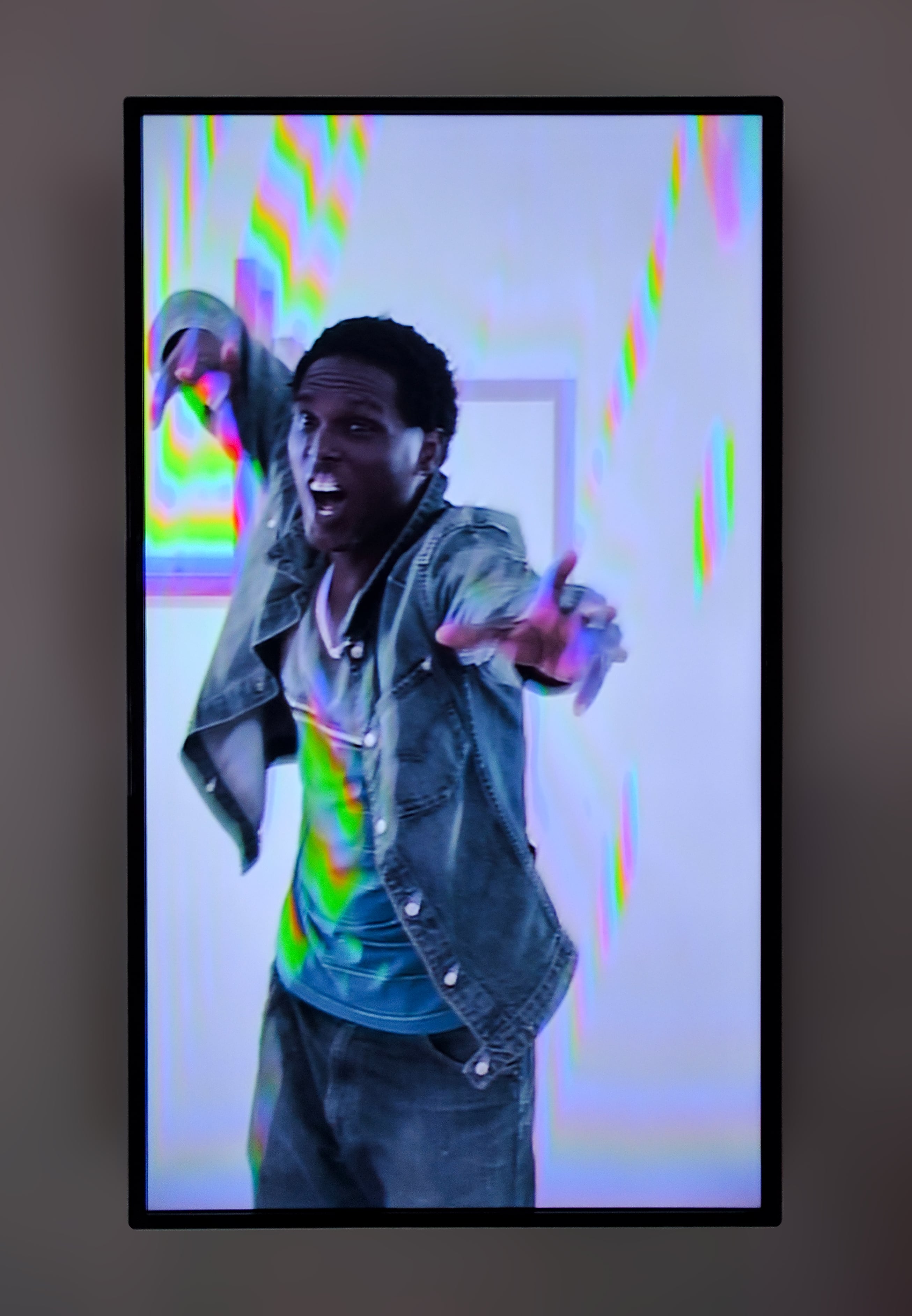 "Power to the People features three media artworks by Benton C Bainbridge that exhibit his experimentation with media and technology: Weaving 5d (from a series of 14 short digital media pieces), Life-Size Allyssa Jill (a 3-channel chromatic video installation of a human figure in variant motions) and Just a Sec—a collaboration with Jeff Carpenter (a lenticular print dissecting a second of time displayed physically). The artist’s handcrafted media artworks are created in his custom-built video synth studio in the Bronx, New York. Eschewing the precision of digital imaging tech, Bainbridge presents these rough-edged, noisy and imprecise compositions as an impractical—yet more approachable—alternative to the cold-calculation of traditional media art."
-Alaina Simone

Benton talks about his solo and collaborative artworks for AFH @CADAF 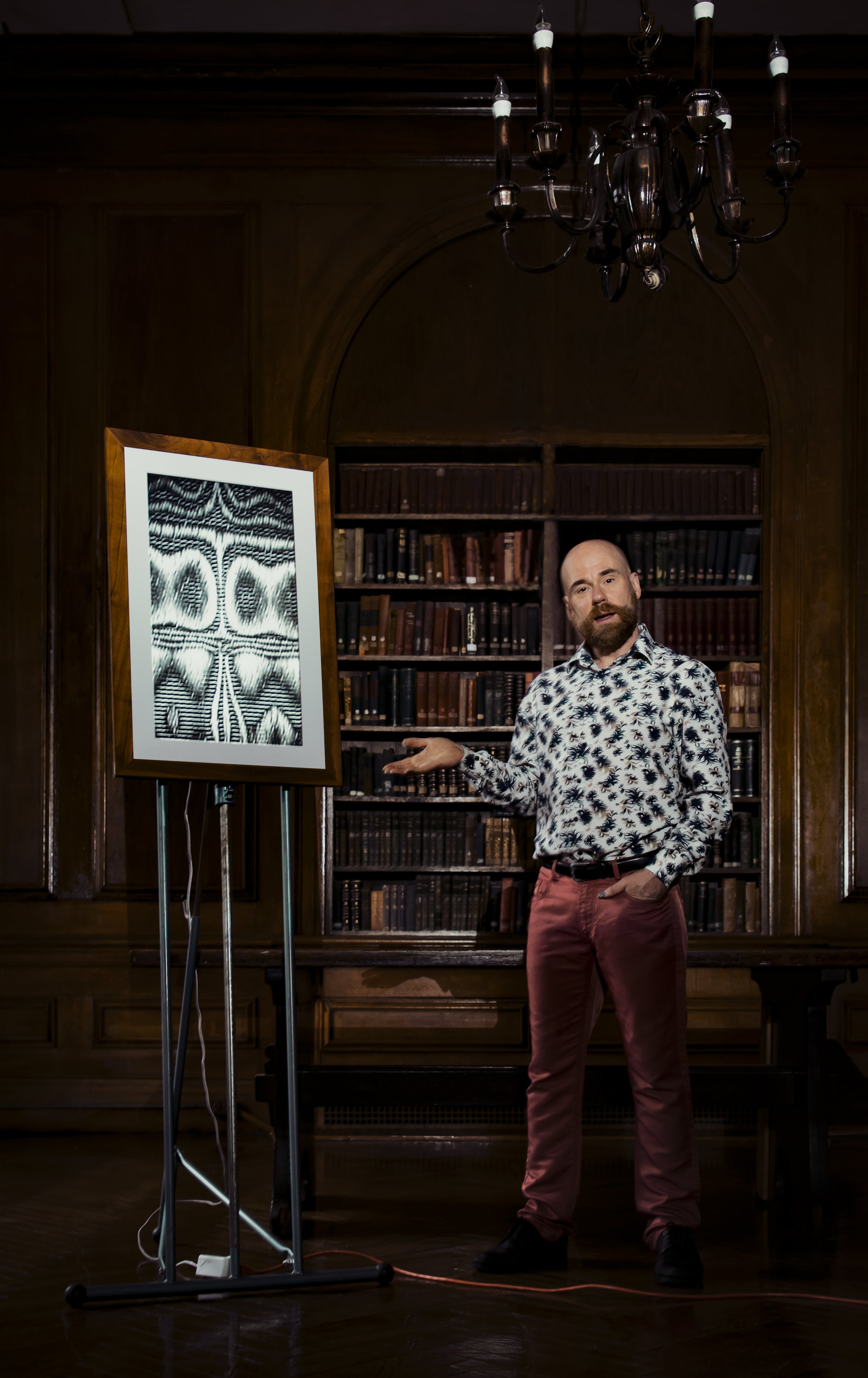 During pandemic lockdown, the Freedman Home closed its doors to the public and focused on reaching its community—and beyond—through the interwebs. AFH made a documentary series about the Artists-In-Residence, including this video about Benton.

Bainbridge is on the faculty at SVA MFA Computer Arts.